In conformity to the data published in a report of United European Gastroenterology (UEG) in July 2017, in Europe, the consumption of alcohol per capita is the highest in the world, being noticed as well an alarming increase of the number of digestive cancers associated to it. 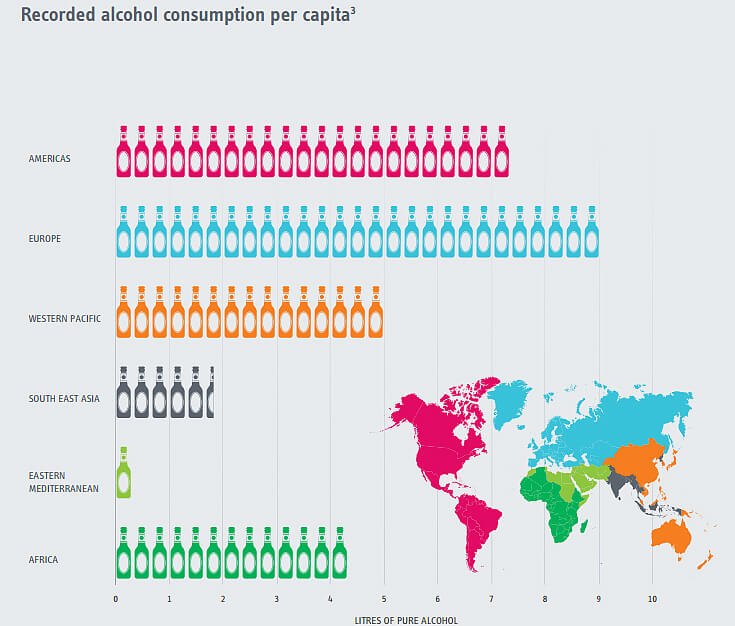 With an average of alcohol consumption of 2 drinks per day, the adults from all 28 states members of the European Union (EU) face a risk 21% higher to develop colorectal and oesophageal cancer.

One fifth of the population of Europe over 15 years consumes alcohol in high quantities at least once per week, none of the EU states registering a low consumption of alcohol per capita, defined as one or less alcoholic drinks consumed per day.

The moderate consumption of alcohol was defined as one – four drinks per day.

The exaggerated consumption of alcohol, defined as five or more drinks per day, is associated with a significant increase in risk of pancreatic, hepatic and gastric cancer. In Eastern Europe, the risk of death pursuant to such cancers in the context of excessive consumption of alcohol is 7 times higher than in the Mediterranean region of EU.

According to the data of World Health Organisation (WHO), in 2016, the annual consumption per capita of pure alcohol in EU was estimated on 27 litres, comparatively to 22 litres registered in USA. This means an alcohol consumption of 2 thirds less in USA than in Europe.

The most common 4 forms of digestive cancer in the world – colorectal, oesophageal, pancreatic, hepatic and gastric – are responsible for more than 3 million deaths per year and over one-third of the cases of deaths caused by cancer in the world.

The UEG report states as well that Europe is the region with the highest consumption of alcohol in the world and, consequently, it records the highest number of disorders associated also with premature death determined directly by the consumption of alcohol. Consequently, it is a priority the implementation of a politics of prevention as well as interventions on the level of rates, taxes, cash and marketing regulations.

None of 10 Europeans is not aware of the connection between alcoholism and the risk of digestive cancers, although 30% of the deaths determined by gastrointestinal disorders is caused by consumption of alcohol. The lack of such awareness seems to be a common phenomenon among population and medical staff.

The UEG report includes the most recent data of specialised literature, publications of European Association for the Study of the Liver, the Association of European Cancer Leagues, the European Liver Patients Association, Pancreatic Cancer Europe, EuropaColon, and Eurocare (the Alcohol Policy Alliance).

The results of the study European Prospective Investigation Into Cancer Study (http://epic.iarc.fr/) show that, on women, a daily consumption of one drink is associated to 80% of cancer cases on level of upper digestive tube, colon and liver. On men, two drinks per day are associated to 57% of all cases of digestive cancer.

The UEG report supports the recommendations of reduction to minimum of 10% of total consumption of alcohol until 2025.

The authors of report remind as well that the interests of industry rival directly with the health benefits of population. Unfortunately, the EU commercial interests and strong lobby made by alcohol industry prevented the implementation of effective politics on level of Union, despite the fact that direct and indirect costs incurred by society pursuant to consumption of alcohol are much higher than of the taxes charged.

Currently, it has not been determined an official and generally accepted level which may illustrate the safe consumption of alcohol, when it comes to the occurrence of cancers.

Also, the reduction of alcoholism may be performed as well by reduction of massive publicity and advertising, complete removal of TV advertising promoting alcohol consumption and any kind of advertising for minor consumers.

With respect to the politics that may be implemented, the authors of report talk about the reduction of access to alcohol, method proved to be, during the history, one of the most efficient manner of reduction of alcohol consumption. Alcohol should be traded only in special stores, with rates minimum inaccessible to the most vulnerable segment of consumers – minor or unemployed